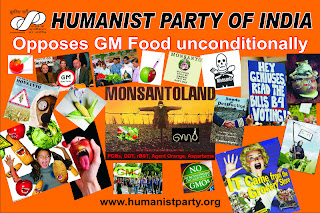 The HUMANIST PARTY of INDIA, as part of the DELHI ALLIANCE FOR SAFE FOOD, supports the Campaign for immediate cancellation of the "BIOTECHNOLOGY REGULATORY AUTHORITY OF INDIA BILL 2011", that is proposed to be tabled in the Parliament at any time.

The BRAI bill 2011 signifies the blatant nexus between Multinational Seed companies who are pushing their Genetically modified crops in India and our government institutions, and the corrupt Politicians and the bureaucracy.
The BRAI bill 2011 is a negative legislation since it is based on “anti-life-manipulation-of-science” - it indeed truly represents CORRUPTION of Ideas acting in the fields of Science, Law, Industry, Politics among others.

This corrupt practice of multiple players, being presented to India by Monsanto and its partners in this death-game is unfortunately getting the full support from UPA Government headed by the Prime Minister Shri Manmohan Singh, and deserves full-complete opposition from all life-supporting Indians.

The campaign being conducted under the banner of DELHI ALLIANCE FOR SAFE FOOD, formed by a wide cross section of consumers, farmers, traders, civil society, trade union activists, scientists and academics from Delhi support of hundreds of Organizations representing millions of Indians, urges the Manmohan Singh Government to not only drop the proposed legislation completely but also cancel all the current trials being conducted in different parts of India on different kinds of GM seeds. These trials are not just illegal and immoral but also anti-life, as we have seen deaths of hundreds of thousands of farmers specially in the areas where BT-Cotton has been allowed over the last years.

No Government in a true-democracy has the right to sell the security & sovereignty of its people's lives. If any Government attempts to do that, it will risk facing the strong opposition of people leading to the end of its undemocratic rule.
Continuation of insisting this bill will only prove the corrupt-violent credentials of the current Government and the people of India, in that case will have no choice but to work for a new Government that will be formed based on the following principals :

1. ACTIVE NON-VIOLENCE:
2. HUMAN BEING AS THE CENTRAL VALUE:
3. CO-OPERATIVE SYSTEM:
4. NON-DISCRIMINATION:
5. PRINCIPLE OF OPTION AND OF NO MONOPOLIES:


More details at :
http://www.facebook.com/groups/antigmfood/
Posted by Unknown at 11:30 AM