Anna's sixer does it - India wins major round against Corruption!!! 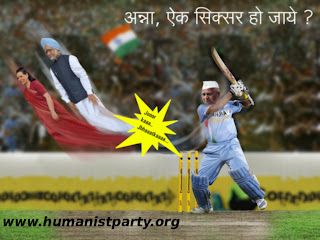 Congratulations, My India, Our India, we have won the first battle with Non-violence against the corrupt mafia that has its vice grip on the country.
Finally, after 4 days of fasting by Anna Hazare, supported by hundreds of volunteers fasting with him in Delhi and hundreds of thousands of other supporting the cause across India and in many other countries, the Government caved in and agreed to all the demands of the group "India Against Corruption", led by Anna Hazare.
This is truly a win of every honest Indian who has waited for more than 40 years to get this law enacted. Hold on, the law is far from being enacted, but the first battle has been won and there is a time bound program to create the law by the end of June so that it is approved by the cabinet of Government of India to send it to Parliament for its passage in monsoon session of the Parliament.
Yes, we know that the mafia will not give it in so easy and they can produce many hurdles like a magician does with the rabbit. But, let the beware ! People have tested a victory and they now know that they can create victory through non-violence by coming together. This is a historic progress in the evolution of India as a democracy.
As we always said, if we people come together, everything can change. We will keep working for this change and for enhancing this faith among the people.
08 April 2011, 2320 hrs, IST.
Posted by Unknown at 11:28 PM